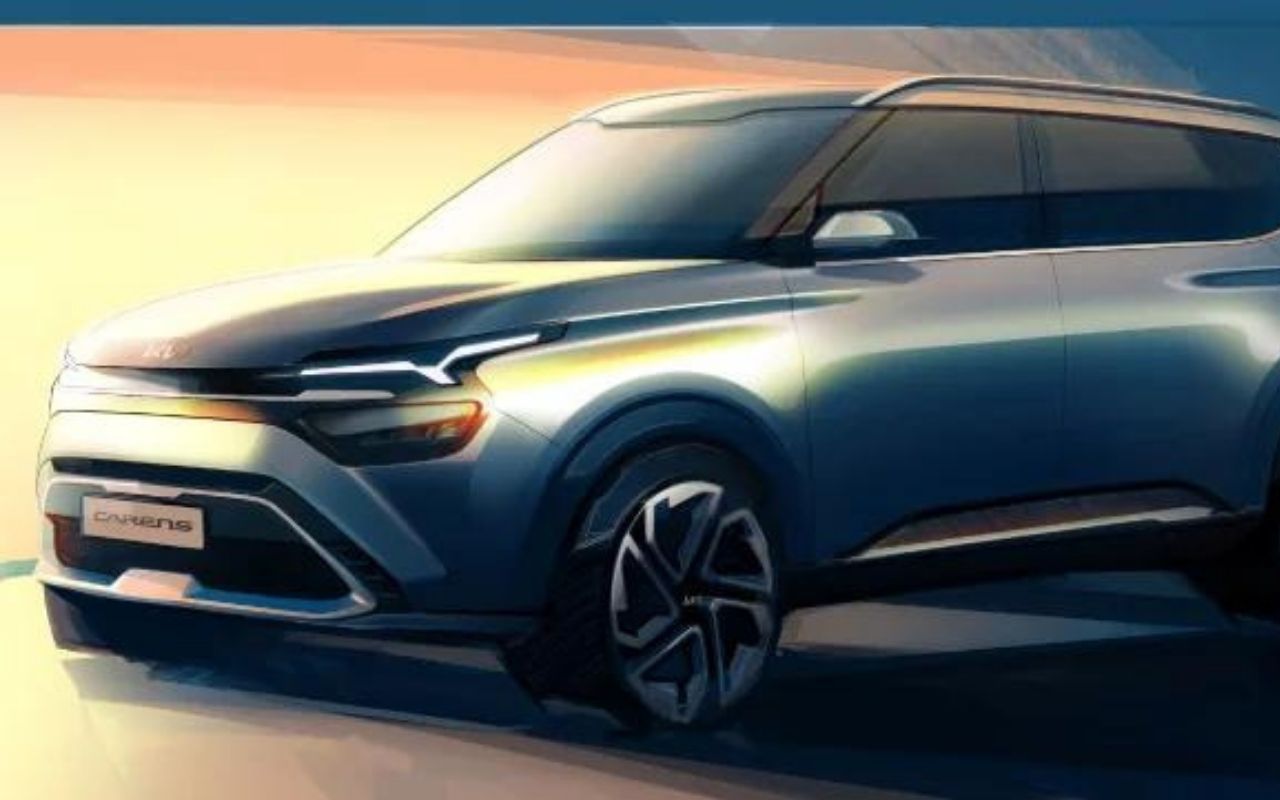 On December 16, 2021, Kia India will host the global debut of the Carens in the Indian market. The official name of the impending three-row UV was announced just a few days ago, accompanied with a partial image of the outside. The latest photographs now display the exterior and interior features, revealing a remarkable aesthetic concept.

A clamshell-shaped bonnet with Kia's new corporate logo, sharp-looking LED headlamps with attractive LED Daytime Running Lights on top, a wide grille section with hexagonal metallic trim, and an additional horizontal LED strip between the DRLs and headlamps to make up the Kia Carens' front fascia.

The Carens has a flat bonnet, an upright nose, and a robust front bumper with a strong divider line running from the top to the air inlet at the bottom. The Carens has a twin headlamp design with slim wraparound lamps and a smaller grille than most other cars. The main headlamps are located below the slim units and are likely to be LED-equipped, at least on higher trim levels. The headline's daytime running light inserts are based on contemporary Kia models, such as the Sportage SUV, which was just unveiled worldwide.

The Carens has a slab-sided appearance on the flanks, with wide wheel arches and body cladding that runs the length of the vehicle. The headlamps form a strong character line that fits in with the front door. Another character line emerges from the back door and meets the taillights to complete the pattern. The taillights, in particular, are unlike any other Kia model offered in the United States. They are similar to the Tata Punch in that they extend from the rear fender and have extensions below, with both units connected by a light bar in the middle.

The tailgate has several horizontal creases, one of which runs the length of the tailgate and elegantly merges with the rear wheel arches. The rear bumper, like the front, is muscular and features many design elements, such as two false silver parts, to match the Carens' SUV-like appearance.

Interior concepts of the future Kia Carens have also been revealed by Kia. A leaked shot of the interior of the future three-row model gave us a clear impression of the car's premium-looking dashboard and other parts.

The Carens will have a big dashboard that stretches a little further towards the front windscreen, according to the designs. Kia has confirmed that higher-spec models will get a 10.25-inch infotainment screen, while lower-spec trims may get an 8.0-inch one that was previously observed.

While considering the instrument cluster it will be totally digital and speaking about the steering wheel, it will be identical with the Seltos and Sonet's. It will also have multifunction buttons for audio controls, voice commands, and other functions.

While Kia has not revealed any information on the seating options, reports say the Kia Carens will be available in 6- and 7-seat configurations, depending on the type. Multiple AC vents, cup holders, soft-touch materials for all three rows, and an abundance of USB ports are all expected for second-and third-row passengers; the second row could even get wireless charging.

Kia Carens: What's under the hood?

The Kia Carens is expected to be equipped with a 1.5-liter four-cylinder petrol engine that produces 115 PS and 144 Nm, as well as a 1.5-liter four-cylinder diesel engine that produces 115 PS and 250 Nm. Both engines are found in the Kia Seltos, Hyundai Creta, and Hyundai Alcazar. They will probably be available with both manual and automatic powertrain options.

What about the competition?

The Kia Carens KY will be unveiled for the first time on December 16, with a market debut planned before the end of the current fiscal year, in February or March 2022. The Kia KY Carens will be manufactured in India and exported internationally. The Maruti Suzuki XL6 facelift, which is also slated to join the market around the same time, will be a competitor. In addition, the vehicle will compete with vehicles such as the Hyundai Alcazar and others.