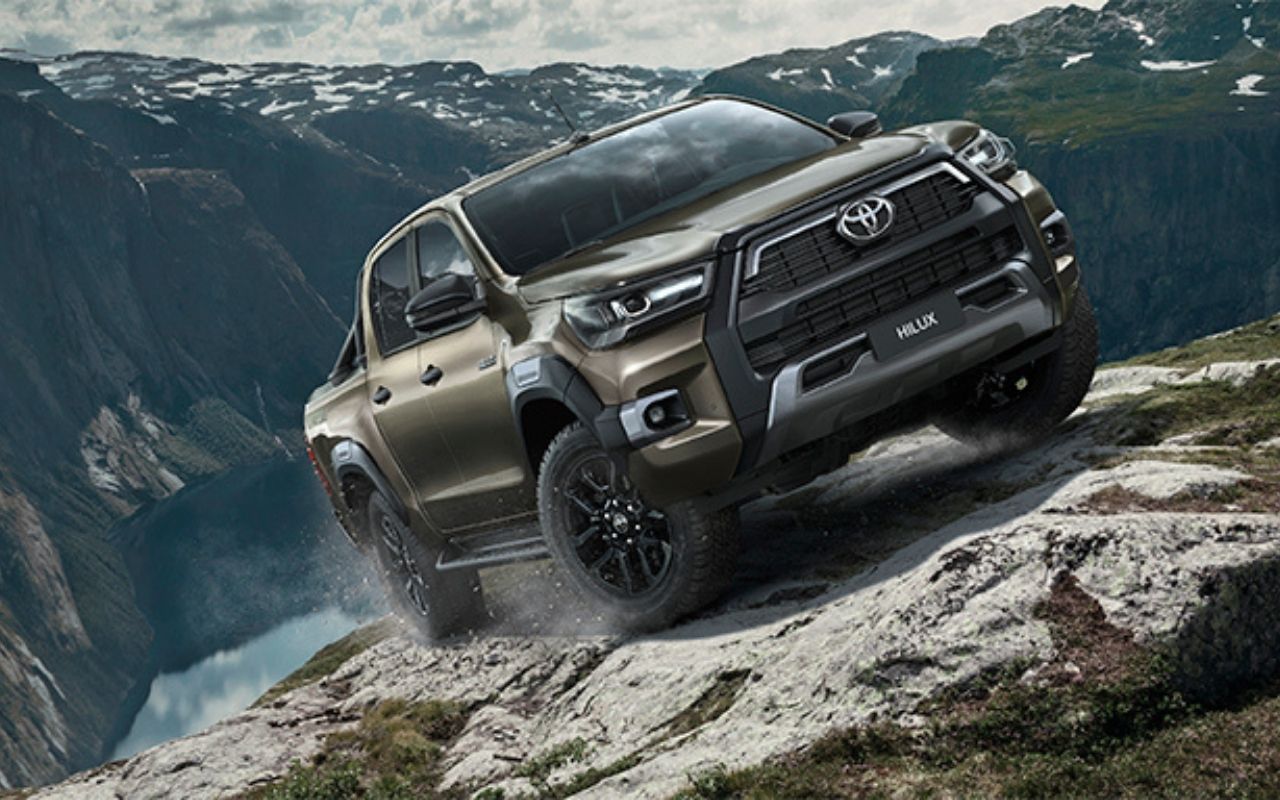 In the second part of January 2022, Toyota India will introduce the Toyota Hilux lifestyle pick-up in India. This validates earlier reports that Toyota was getting ready to launch the Hilux in India. Along with the Fortuner and Innova, the Hilux will be the third model from Toyota's IMV platform, and it is likely to share many components with these cars. The Toyota Hilux 2021 is expected to be locally assembled and will compete with the Isuzu D-Max V-Cross.

Here, we have heaped all the information related to the new launch of the Toyota Hilux.

How does it look outside and inside?

The new Hilux pickup will be built on the same IMV-2 platform as the Indian-market Innova Crysta and Fortuner. The Hilux, on the other hand, will be far longer than both of the aforementioned vehicles, measuring over 5.3m in length and having a wheelbase of more than 3m (closer in size to something like the Isuzu V-Cross).

A huge hexagonal front grille, flanked by swept-back headlamps with LED daytime running lights, will also distinguish the Hilux for India. When viewed from the side, the pickup truck's length is considerably more apparent, while the flared wheel arches, body cladding, and side step give it a tough appearance. The back appearance is plain, as is the case with most pickup trucks, though the sculpted taillights do give some individuality. A double-cab version of the Hilux will be available in our market, but it is unclear whether Toyota will also produce a single-cab version.

To conserve money, Toyota is likely to equip the Hilux with interior components from the locally built Innova and Fortuner. Because the Hilux is dimensionally comparable to the Fortuner, the dashboard and seats are likely to be the same.

An 8.0-inch touchscreen infotainment system with Android Auto and Apple CarPlay is also expected in the pickup truck. Closer to the introduction, the entire list of safety features for the India-spec model will be published. However, the fact that the Thai-spec Hilux received a 5-star rating in the ASEAN NCAP crash tests should provide consumers with a sense of security.

The India-specific version The facelifted Toyota Fortuner is set to get the same 2.8-liter four-cylinder turbo-diesel engine as the Toyota Hilux. When combined with the six-speed automatic transmission, this motor produces 204 horsepower and 500 Nm. When combined with the six-speed manual, the torque output reduces to 420 Nm. Given the 4x4's specialized positioning and usage cycles, the 2.7-liter petrol engine is unlikely to be included. While the ladder-frame design will be shared with the Fortuner, the Hilux will be equipped with leaf springs and a stiff axle in the back to boost payload capacity and off-roading performance.

Given that a considerable amount of its parts will be shared with the domestically made Innova and Fortuner, we estimate the Toyota Hilux to be priced around the Rs 25 lakh-35 lakh (ex-showroom) range.

The only direct competition for the Hilux will be the Isuzu Hi-Lander and V-Cross, which are the only other pickup trucks geared towards lifestyle shoppers and cost between Rs 18.05 lakh and Rs 25.60 lakh (ex-showroom, Delhi).